For all the royal watchers out there, this past weekend was one they have been waiting for. For those that aren’t royal watchers, Prince Harry married his long-time girlfriend, Meghan Markle. Personally, I have no idea what the fuss is all about as I have very little interest in the royal family or what they do. Many people used their vacation time and spent thousands of dollars to travel to the town of Windsor, United Kingdom for the wedding. Most of these people didn’t even have an invitation and they travelled to get a spot on the route to and from the church. Many bought their tickets the day the wedding was announced or shortly after that date. I can’t imagine planning a trip overseas, as many of these people did, to maybe secure a spot on the route the couple will be travelling in a horse-drawn carriage after the ceremony. I couldn’t even imagine getting up at 4 am EST to watch the wedding on television. 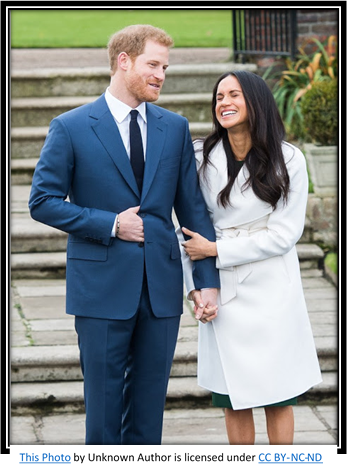 It’s not like I have contempt for the royal family, I just don’t see the importance in recognizing a monarchy that has essentially no authority in how any country within its dominion is run. Perhaps in some countries, the royal family calls all the shots, but that’s not the case in the United Kingdom anymore. The British enjoy living in a democracy where the government is elected by its citizens. The royal family in the United Kingdom is now one that is essentially one which has been delegated to making appearances at various social and fundraising events and paid very well out of the public purse for such. Would I like to be a member of the royal family? Not in the least. Members of the royal family may receive everything on a silver platter, literally, but they also have the scrutiny of the public along with the media and the ever-evil paparazzi. As many will recall, Princess Diana ended up dead in a car accident in Paris while being pursued by someone on a motorcycle trying to get pictures of her and her then boyfriend. The automobile crash that claimed the life of Princess Diana cannot be labeled as anything less than a tragedy. There were multiple factors which resulted in her death, but the most deciding factor in my opinion was the relentless chase of her automobile by a photographer trying to get pictures.


We often read or see stories about the expense of some weddings and how extravagant they were. I think for many, trying to top a royal wedding is what they aim for in terms of expense and extravagance. There are some estimates that the cost of the wedding this past weekend could be as much as $42 million, with the security costs, which will account for most of the cost being paid for by the taxpayer. The royal family will be paying for the rest of the costs, but at the end of the day, that essentially means the taxpayers will be footing the entire cost since the royal family receives its money from the public purse. I’m not sure what advertisers were paying for a minute of air time during the wedding, but media companies must have spent a princely sum as well to send crews for the event.


I recall waking up early one morning and turning on the television to watch the news only to find out it was the wedding day of Prince Charles and Diana. Even back then, every television station was airing the wedding and the only news station you could find that had actual news on it was CNN. I guess even back then, there were numerous royal watchers that had to see the wedding. If you’re a betting person, you could even bet on various aspects of the wedding, including the color of the dress the queen was going to wear, whether Harry would wear a military uniform or not, and many other items. I’m not sure how the bookies made out or how much money some of those placing bets on the wedding fared, but I can think of better things to do with my money other than placing bets on a royal wedding.


Unfortunately, the royal wedding seemed to take precedence over much more newsworthy items, such as the school shooting in Texas. There’s a problem with our society when a wedding is deemed more important than students being killed in a school shooting. Now the wedding has taken place and people are wondering when the new couple will take their honeymoon or where they will go to celebrate their recent nuptials. Now that both William and Harry are married, we probably will not see another royal wedding until one of their children has one. The queen and Prince Phillip are both getting on in age, so it’s only a matter of time before there will be a funeral and we can be sure that it will be televised around the world as the weddings are. But now, life returns to normal and we can start trying to address more serious problems in the world, like putting an end to school shootings.