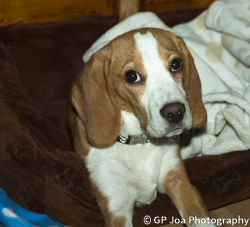 Walking Your Dog is No Longer Safe

I’m not entirely sure why we are seeing more dog attacks over the last couple of months, but I am sure that the blame for these attacks can be attributed to the owners of the dogs. My Beagle Sunny has been attacked twice in less than 3 weeks by two different dogs. The first attack was from a Pitt bull who was roaming around the streets loose with no collar, and possibly without the owner knowing he was loose, or just not concerned if they did know. I tried to get my dog out of the sight line of the Pit bull but was unable to do so. Once the loose dog saw my Beagle, he headed our way and it seemed he was on a mission. He took one sniff of my dog and then started to attack. My Beagle weighs around 40 pounds, which I estimate is about 50 pounds less than the Pit bull, and no match. Once he started to attack, I had no choice but to do what I could to get the Pitt bull off my dog. I kicked him once under the jaw, which slowed him down and had him retreat somewhat. However, within seconds, he was back on the attack, forcing me to kick him again, this time I aimed for the ribs and kicked as hard as I was able. This time he started to yelp and was in pain and decided it best to go away. Just as he was retreating to his home, Ottawa By-Law enforcement came driving around the corner to see the house the dog went to. Someone in the area had seen the dog running loose once again and had called By-Law to deal with the issue. It turned out that this dog was often getting out of the yard and roaming the area and was also observed to be aggressive towards other animals and people. With the number of complaints that had been received and that now there was also a complaint that this dog had attacked another dog, the owner received multiple citations pertaining to his inability to control and contain his dog. This same dog had attacked my Beagle on two previous occasions, with one incident having myself getting bitten and scratched trying to get the dog away from mine. The woman who was walking him, would let him off his leash as the area was designated as such, but then wasn’t cognizant enough to recognize her dog was aggressive towards other dogs and people. When her dog did attack other dogs, she didn’t even try to intervene and just stood there and watched. When it had attacked my dog months before the latest attack, several people were there to witness what had happened and several told her that if she had no control of her dog, not to bring it back there and if they saw her again, it would be reported to Ottawa By-Law.

This past Saturday, my wife and I were out for a walk with our dog and had planned to hit a local coffee shop for our morning coffee. The attack happened so fast, I couldn’t comprehend what was going on, or where this very large Rottweiler had come from. Before we knew what was going on, the Rottweiler was on top of our Beagle trying to get at his throat. As our dog was on his leash, it was impossible for him to get away and the Rottweiler continued with his attack. I started to kick the dog and my wife did the same. Somehow, my wife was able to get the Rottweiler by the collar and pull him away. Our dog had somehow gotten out of his collar and had run to get behind some people who were in a nearby yard for protection. The woman who owned the Rottweiler came over the get her dog and when she did, my wife punched her in the face as she was so upset at the situation and that this was the second attack in just over two weeks. The owner of the Rottweiler started complaining about the assault and that it was an accident that her dog had gotten away. People who had witnessed the attack made it clear to the woman that they would probably have reacted in the same way and that her dog was dangerous and made people in the area nervous. One man said that the best thing for her dog was a date with a shotgun. What made the situation even worse for me, was when she told us she was a dog trainer. Clearly, she is training these Rottweilers to be attack dogs, but not able to teach them to stop when called. She also told us that the dog has two collars and is always double leashed, but she wasn’t smart enough to roll the car window up halfway so the dog couldn’t jump through it or to use the seat belt with a harness designed to keep the dog in the car. The harness is designed to keep the dog safe should there be an accident, but also restrains the dog from getting out of the windows or doors until you have a leash on them to remove them from the vehicle.

Just this morning, I was reading an article in the Ottawa Citizen about another dog attack this past Saturday evening. This attack involved two people and a Pitt bull, which resulted in injuries serious enough to require an overnight hospital visit for one and an emergency room visit for the other person. Police attended where the attacks occurred, but there were no charges laid as the owner apparently was not at the residence, despite being the person responsible for the compliance of regulations pertaining to their dog. I think at this point, people who own these dogs know that the police or By-Law won’t charge anyone other than the owner and they escape prosecution by lying and saying the owner isn’t available. Fortunately in this recent attack, the owner was located and received several fines relating to the attack and was ordered to ensure the dog is muzzled moving forward. For those who were attacked, this enforcement does not go far enough. These dogs should be removed when they attack people or other dogs. These dogs are generally this aggressive because of the owners and are often trained to be aggressive. The way I see it, if an aggressive dog will charge and attack another dog for no reason, they will also attack a child if the opportunity presents itself. Any dog that will attack grown men, should not be allowed to live in a populated area. The men that were attacked by the Pitt bull, indicated that the dog had no collar and attacked without any provocation. One of the men who was injured, was trying to protect a woman the dog was charging and when he got between her and the dog, he was the one who ended up paying the price. No doubt when he learned that there would probably be no charges to the owner of the dog, or that the dog would be removed, it was extremely frustrating.

With all these incidents occurring within a few blocks of where I live, it’s very concerning. I can understand that dogs will sometimes get loose, but most of those dogs are household pets and would not attack people or other dogs. People who own dangerous breeds or have dogs who are trained to be aggressive, need to be vigilant on where their dog is at all times and ensure they are not able to get loose in the first place. The dog trainer with the Rottweiler could have easily prevented the attack by simply ensuring the car window was up high enough so the dog couldn’t jump out. Also, being a dog trainer, she had to be aware of how aggressive her dog is and should have taken every precaution to prevent her dog from getting loose, as well as ensuring her dog followed commands, like coming back when called. I can’t blame the dog for its behavior, but I can blame the owners as they are directly responsible. Owners need to take on the responsibility of ensuring their animals are properly trained as well as ensuring they are properly contained, whether that be a fenced enclosure or using the proper leash and collars to restrain the dog. Dogs become aggressive when they are trained to be that way or are not trained at all and are not exposed to all their surroundings. All dog breeds need to be properly trained as well as socialized, so they are respectful of people and other animals.  When I see aggressive dogs, and those dogs will attack other dogs for no reason, I must believe those same dogs will also attack a child or adult if the opportunity presents itself. Enforcement also needs to be stepped up when it comes to dog attacks and the animal should be removed whether the owner is present or not. I have little doubt that most of these owners would not even show up to claim their dogs, let alone take responsibility for the damage to the dog caused. They would simply get another dog and train it to be aggressive as well and continue to have no remorse should that dog kill another dog or a human. There are always those people who should not be allowed to have an animal of any kind, as they get them for the wrong reasons, and may also be very abusive towards the animals, which doesn’t help at all with the aggressiveness they may have.

It’s getting more worrisome to do something that used to be enjoyable, namely, walking my dog everyday. Now one must keep their eyes and ears open to watch and listen for dogs that may be loose and possibly aggressive. When I was a kid, it was normal to see dogs running around the streets loose, but over time, laws were put into place regarding loose dogs for a reason. As a kid, I recall hearing many stories on dog attacks and my own sister was attacked by a dog while walking home from school. I believe that dog ended up with a bullet in the head as it had attacked others and residents were unwilling to tolerate any further attacks, taking matters into their own hands. Unfortunately, dog attacks are becoming more common, and something needs to be done to prevent these from happening and getting these aggressive dogs off the streets. Dogs who are constantly getting loose, need to be removed from their owners as they are not responsible enough to keep their dogs contained properly. I know that given all the attacks recently, many people are now carrying knives to protect themselves and their dogs from these random attacks and should one of these aggressive dogs be killed by someone protecting themselves or their animal, the blame can only be placed on the owner of the aggressive dog. If you or your dog happens to run into a loose and aggressive dog, I would suggest you contact your local law enforcement or By-Law agency as a dog which becomes aggressive could result in injuries to yourself or your pet. Owners need to be held accountable for the actions of their pets and need to follow the rules and regulations in their area or any areas they may visit.